Designed and produced for the Yokohama 2005 International Triennale, this is a mobile FM radio station and a ticket booth located outside the exhibition grounds. Blue colored cones used for construction were set up as signs throughout the exhibition grounds, and their height of approximately 70cm was used for table legs. The colored cones were given various functions, such as monitors, speakers, lighting, and places for fliers. 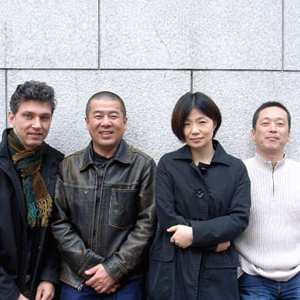 Mikan is a French-Japanese office of architecture based in Yokohama Japan. It was founded by its present four partners (Kiwako Kamo, Masashi Sogabe, Masayoshi Takeuchi, Manuel Tardits) Mikan tries to work beyond disciplines. Its works go from large facilities in Japan and China to schools, houses and smaller scale interior architecture and furniture. Mikan also participate to various workshops and related installations.